Home PodcastBlog 4 Things Triumph Can Teach Us About Content

I'm not going to claim to be a journalist or the fancy term for a journalist today…”a recovered journalist.” But I've worked in enough national newsrooms to smell what they're cooking.

Their secret sauce? Cold pizza. No dog's nose required. But a dog's nose can help uncover Especially if that dog is none other than…Triumph the Insult Dog. Remember him?

I worked a live event in Boston (years ago) where Triumph attended. The producers of Comedy Central were shooting a mockumentary starring the dog. And they somehow got my number (leave it to me to get involved with the most ridiculous ideas ever).

It just turned dusk. And I was standing alone, steps away from a news broadcast, mesmerized by the big, bright TV studio lights. The 18 hour work days coupled with only 4 hours of sleep started to slowly wear on my mind.

Then my phone rang. It was one of the producers.

“Hey Jessica, do you see the small dog and big, moving lights? That's us with the crowd following behind…and we're coming towards you!”

Why were they coming towards me? Triumph would want to talk with the media personalities. But they were busy on live TV and unavailable. What was I going to say?

A swarm of people started to inch closer. Was I hallucinating?

As I stood there wondering what to do next, their approach became clear.

For the mockumentary to work they needed to:

Live TV was becoming dull. Even though it was “live” there was the teleprompter, makeup, bright lights, and multiple assistants tasked to de-lint your Armani suit.

Perfection can be pretty. But people want grit.

Triumph didn't care about what happened live, on-camera. It was about the behind-the-scenes action thatÂ went intoÂ the live production. People wanted the story about the story. And the back story of TV news involved innocent me (even though I'm really not that exciting. Or that innocent). 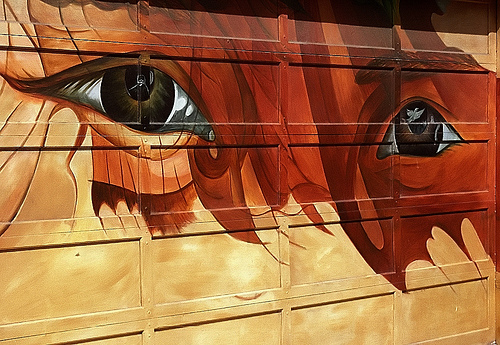 Knowing the back story is often necessary to make the actually telling of the story interesting.

One of my favorite stories about Facebook is not with Mark Zuckerberg. It's with artist and painter David Choe. He painted murals in the interior of Facebook's first Silicon Valley office and he talked with Howard Stern aboutÂ his art, and how he got involved with Facebook.

David isn't a President or VP of Communications. He's a graffiti artist. But he has the most fascinating stories to tell.

Good marketing involves everyone telling the story (not just the President or VP of Communications). The top-down approach to storytelling works for some brands. But if everyone in the company became an active, engaged participant the story would truly coalesce.

3. Know that crude humor can only take you so far.

We don't need another GoDaddy commercial to realize this.

Triumph's schtick was “ha ha funny” for the first five minutes (if that). But it didn't have power to last. Triumph used his humor to tear down traditional barriers to get the back story. But it wasn't enough to sustain him (where is he now? Triumph? Are you out there?)

Use whatever it takes to get through the door. But make sure the content sustains.

The traditional barriers to news were armed guards at entryways. You'd need to sign your name, give a photo ID and walk around with an electronic key fob to get anywhere in the building. Once you're in the energy can mesmerize. You passed the barriers. You're in the door. You're a part of the elite media. How cool!

And then you realize traditional news isn't really as cool as you thought. They're not engaged with their audience. And they're holding on to a medium that no longer resonates. Traditional news is one light among many. Using just one light is blinding. And it can make you inaccessible.

Inaccessibility is a symptom of the past. It's like having “your people call my people.” And it's a sign of people who rest on laurels from a previous era. Time is shifting those laurels. And those “traditional barriers” are becoming extinct.

Technology levels the barriers. Don't let the teleprompter, Armani suit or big bright lights fool you. Anyone can now enter the building.

This is the new reality. If you're not planning where you're going, you're blinded by the light.

How Fast Media Dictates Your Dreams

5 Tips to Stay Ahead When Marketing Your...

Why No One Reads the Fine Print

What’s Your School of Thought?

How Creativity Inspires Technology – an Interview with...

How to Use Running to Inspire Creativity for...