Home PodcastBlog 8 Things I Learned in 2016

I spent the past year packing suitcases that led me to new countries and friends, while unpacking parts of my identity that needed to go, searching for signs that I belong. And here's what I know: I fell in love when I knew I could use my past to grow. You can end the year with purpose without being in a particular place if you can break apart with Grace (the word I chose for both 2015 and 2016). This blog is my home: where I put my thoughts and ideas together more than anywhere in the world. 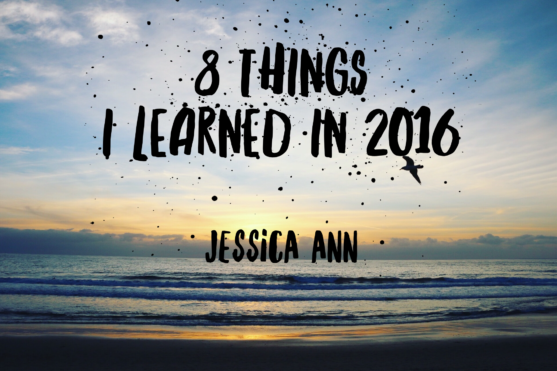 Here are the words that put me together in previous years:

For a seed to achieve its greatest expression, it must come completely undone. The shell cracks, its insides come out and everything changes. To someone who doesn't understand growth, it would look like complete destruction.– Cynthia Occelli

I spent the beginning of the new year cracked apart. I wrote a poem that got published in Elephant Journal. I discovered new things about myself. I let go of old habits.

I believe that there's a time to live what you're going through, and a time to look back at what you went through. Whether you're cracked or waiting to crack, I believe that you need space to come undone without always communicating the process in a “perfect” way.

Here's the thing: if you can surrender into your transformation, you can counter-intuitively move towards the discomfort. When the discomfort disappears, you will start to live life from your heart. This is where you will grow.

2. You are the average of the five people you spend the most time with.

I lived and breathed this Jim Rohn quote this year. Despite traveling and speaking and meeting a ton of incredible new human beings, I spent a ton of time alone this past year. I could have gone to my local bar with local friends and stayed ashleep (not a word). But instead, I tried to more mindfully surround myself with smart, fun and interesting people. And I refused to settle for anyone less than incredible.

You can communicate with like-minded people easily today. You can find your tribe online.

And when you finally get to the place where your decisions are made on your current self-worth (and not your previous self-doubt), change the locks to your former life. Sell your possessions. And then hop on that one-way flight with wobbly knees and a half-healed heart. 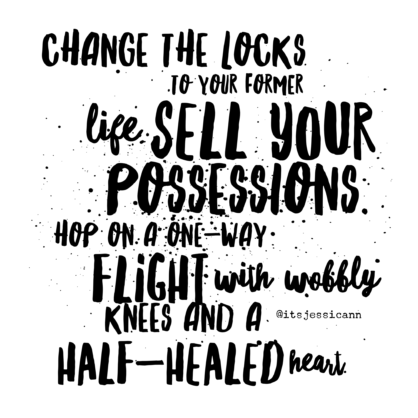 3. Let your stories be your own.

Someone attacked me saying that for someone who writes about “humanizing your brand” I don't do the “human thing” right. Cue my best Alanis Morissette voice: Isn't it ironic, don't you think? Being human is about how we're all different. It's about how we handle challenges at our own pace, using our own personal history and context. If I wanted to project stability in my story, I would be hiding a huge part of myself. So I don't. I strive to embody the mess of being human.

You will make people uncomfortable. You will feel the insecurities of the social norms reflected back on you. Choose to stand in your power. You'll realize that society and culture have had it wrong all along: The point of life isn't to “be perfect” It's to help each other evolve through our own narrative.

4. Narrative can exist in this world as art.

Over the holidays I had a chance to check out the Los Angeles County Museum of Art to see the exhibit Picasso and Rivera: Conversations Across Time. I had a deeper look inside how Picasso and Rivera practiced their art. I saw how their contributions were deeply influenced by myths and stories. Their narrative became sources of creativity, as they were simultaneously fueled by the desire to emulate the achievements of the past.

What does this mean today for your life and business?

You have the ability to tell your narrative, either as a moment in an ongoing story or as a sequence of events unfolding over time. Narrative imposes meaning on things that are essentially undistinguished and meaningless. Let more meaning unfold over time. 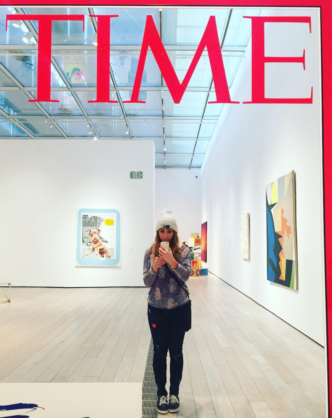 I was trained as journalist and I've interviewed national political figures as well as international celebrities. I'm grateful that I get to interview cool people on my podcast today. But there's a serious problem: Before this year, a somewhat distinct line existed between journalism and social influence. Today there's absolutely no distinction.

It's hard to tell the bloggers from writers from journalists today (mostly because it's a challenge to compete against the big publishers).

Snapchat now has a magazine about living with technology. According to their description, the emphasis is more on “living.” But when the boundary between our digital and analog lives is increasingly disappearing, what does “living” mean, anyway?

Where do the journalists go when the old media model row is dying?

Traditional journalism has been reduced to a reality that's completely inconsistent with real life. And it's up to us to co-create what's really occurring in the world.

We have the power.

If you don't have a desire to create something that's unique, then please – don't write at all. The bloggers that I most admire write in a human way. I'm finding that journalism (along with humanity) are being dumbed down because of the need to be click-bait and/or the “wannabe journalists” who think they need to write in a more formal tone to convey a sense of authority.

The middle ground is the personal voice. We need it now more than ever. I refuse to give it up to sound more “authoritative” or to command a sense of respect.

We are authoritative in our humanness. This is everything.

We're experiencing a new relationship between man and machine. Everything I read and watch is leading me down the rabbit hole of this fascinating topic. From the shows Black Mirror to The OA (both sooo good!), we are at the beginning of a new form of reality that's co-creating our future consciousness.

We can't keep thinking linear about these topics. We need to understand that reality is misunderstood today because it depends on belief. What do you believe that's shaping your reality? And how far down the rabbit hole do you want to go?

7. Virtual reality is a marketing reset.

The social media space is evolving faster than ever. Everything is now highly monetized ad-driven media on the internet (which even the folks at Medium believe is broken). If you believe in the value of Human Content, it's a depressing thought. But it's up to us to reset how we communicate.

Can we reverse the dangerous trend of allowing social media to be a paid channel? I certainly hope so. But we'll need a proper reset. I strongly agree with my friend and colleague Mark Schaefer about why this needs to happen:

“The backlash against annoying marketing and invasive advertising has resulted in filters, ad blocking, and consumer mistrust. Connecting through the entirely new platform of virtual reality gives marketers a chance to say We're sorry. Can we try this again? This time the value will be real.

Let's reset, shall we?

8. Failure is an incomplete success story.

Said another way by my man Matthew McConaughey: “there's never a full stop to any of it.” 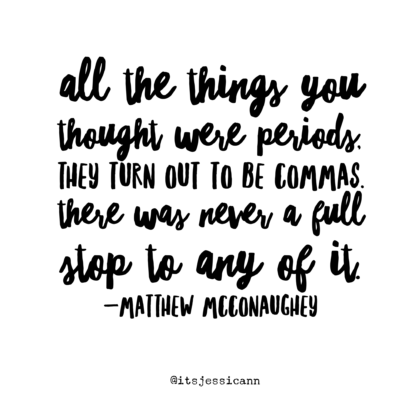 2016 has been a magical year full of lessons of impermanence, loss, and inevitable change. Through all of these growing pains, we have a part to play as artists and change agents. Let's spread the message of love and peace.

But now it's 2017, where commas can reassess both failure and success.

How Humanity Gives Your Marketing an Edge

Want to Host Your Own Podcast?

How to Choose Marketing Tools with Purpose

Bernhard Guenther on Piercing the Veil

Mitch Joel on Connecting With Your Audience

Why Engaging is More Important than Going Viral