Home PodcastBlog How to Avoid Kitsch in Your Content

On your way to realizing your genius, you're going to find a lot of kitsch. It's ok. It happens. It may even happen when you're not being anÂ expertÂ in your industry. So…what is kitsch and how do you avoid it?

Kitsch is art, or rather…wannabe art. Kitsch is content that lacks context.

In a museum,Â good art is thoughtfully curated.

In the online world, bad art is thoughtlessly shared. This is kitsch.Â

But let's do the definition thing. According to wikipedia, kitschÂ is aÂ low-browÂ style of mass-produced art or design using popular orÂ cultural icons. Kitsch generally includes unsubstantial or gaudy works or decoration, or works that are calculated to have popular appeal.

Austrian writer and modernist, Hermann Broch argues that kitsch aims to copy the beautiful, not the good. Did you hear that? Your content is kitschy if you're copying beautiful things. Yet â€“ and possibly due to its imitative nature â€“ kitsch lives within popular culture, social phenomena, cultural icons and history. Whether you like kitsch or not, it becomes an inherent part of art.

Walter Benjamin points out that kitsch â€˜offers instantaneous emotional gratification without intellectual effort, without the requirement of distance, without sublimation.â€™ The feelings of kitsch are fake – which doesn't elevate or evolve our mindset. Kitsch aims to please â€“ which alienates it from true art.

Ahem. Clears throat to make the next statement:

Unfortunately, kitsch isÂ everywhereÂ (said in slow-motion while looking up at the sky, to show that it is, in fact, everywhere). It's even in my own home. And I'm moving because of kitsch (no, not really). But here's a story:

The other day, I mindlessly placed an empty Snapple bottle on the fireplace mantle, in front of a elegantly framed black and white photograph and a candlestick holder. Because I'm fancy like that.

The mindful placement of the objects on the mantle next to the mindless placement of a recyclable was…just plain kitschy. You could argue that it was Andy Warhole-esque. But it really was recycling gone wrong. Very, very wrong. 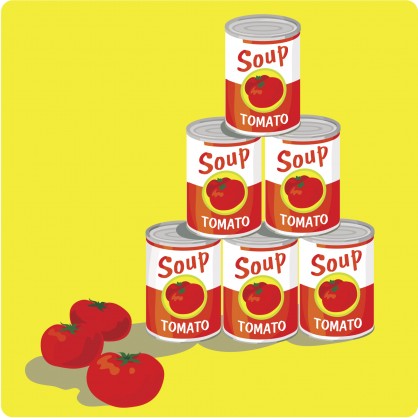 Andy Warhol believed that everyday objects (such as soup cans) were art in the same way that a candlestick holder in a Vermeer painting was art. And while my life looksÂ justÂ like a Vermeer painting everyday (sarcasm), kitsch is nothing more than clutter.

So what does kitsch have to do withÂ clutterÂ content? Content becomes clutter if you don't curate accordingly. You probably hate clutter in real life. So why would you want to create it in your digital life? Clutter is a collection of things lying around. We have too much clutter.

And from this clutter, weÂ have present shock – the inability to listen, explore, and evolve into the next phase of humanity in a mindful way. It's not about the cost of content. Or the ‘shock' of it. It's about theÂ cultureÂ of content. Shocking, right?

As Douglas Rushkoff writes in his bookÂ Present Shock, “Itâ€™s not about how digital technology changes us, but how we change ourselves and one another now that we live so digitally.” Amen, Rushkoff. Can I call you that? Cool.

1. Cause you to think (not just react) to the weirdness of the web

2. Curate the process of positive change. 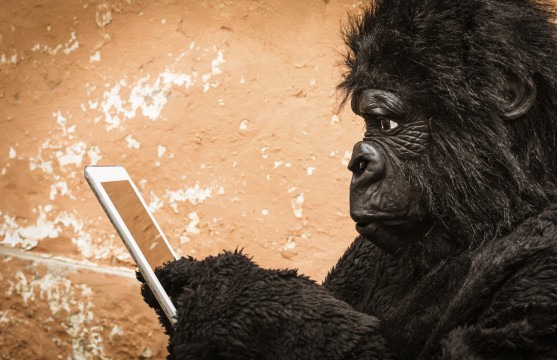 You don't need to go ape-ish over these concepts. But they'reÂ important to grasp. So here are a few ways to avoid kitsch in your content:

Everyone is aÂ publisher today. You no longer need to rely on media companies for the news. You choose your news. This means that in a way, you can create your own reality.

This is why everything you share should be conscious, thoughtful, and mindful. When you're tickled by a story, picture, or video and you choose to share it, you consciously elevate the conversation.

2. Curate around a theme

Pick three things that you truly care about. And only share about that. Sure, we know that you love Star Wars. And sports. And singing in the shower. But please, do we really need to know that you sing Justin Bieber to start your day?

When you stick to a theme, you simplify. Simplifying your sharing makes your messaging more meaningful. And it makes your media channel clutter-free.

The word “quality” gets thrown around a lot. But don't defy it's importance. It may be difficult to create. But it's an art: like theÂ art of flower arranging:Â You'll need to nurture it. Sprinkle it with patience. Grit. Focus. Curiosity. And then let it grow.

It's the silence between the notes that make the music.

Stopping there. Because. Silence.

“Before we are forgotten, we will be turned into kitsch. Kitsch is the stopover between being and oblivion.” – Milan Kundera

When you expand your mind, you evolve. You harness the human heart of humanity – to create meaning. You open our heart to do what's real. What's right. And you live your truth. So you can reign true…to your art.

How to Get Ideas to Write

Seven Ways to Sharpen Your Social

How to Understand Visual Media

The 5 Best Apps to Live a Completely...

Why Earned Media Matters in Marketing

5 Reasons to Start a Blog