Home PodcastBlog How to Use Twitter to Make an Impact

Twitter is a tough nut to crack if you're first getting started. But when it's used effectively, you can use the platform to make a big impact for your business. And you can use it to humanize your brand. But first, take a deep breath. Twitter requires some patience.

You may have signed up for twitter 4 or 5 years ago. And you proceeded to play around for a day (or two). But then you got confused by the hashtag sign (#). You couldn't figure out how to tweet to someone. And you were always wondering what RT meant (Russian TV?).

You didn't want to look like a fool, so you took to other social media platforms that were more intuitive to understand (like Facebook).Â It's ok. You're not alone.

You know that Twitter is more than tweeting about your bacon breakfast. But you're not sure where to start. 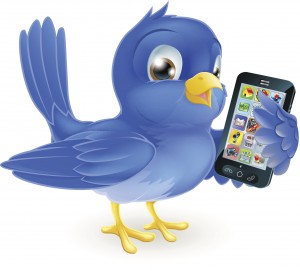 Start by signing up!

I signed for Twitter back in February of 2009…and I remember talking to a few select people that I knew (tip: Twitter is best used for people you do not know!)Â It took me close to three months before I was confident that I was using the platform correctly.Â I remember thinking that Twitter was scary. I felt like everyone was always hanging out without me. And when I tweeted, I imagined everyone quietly smirking to themselves…and then talking about how I was doing twitter all wrong.

You're not doing it all wrong. And no one even notices you.

When you first sign up, keep in mind that noÂ one is noticing you (unless you decided to follow people – but you can choose to Skip this feature). Unless you're a celebrity or a major corporation, no one will even know that you're there. Embrace being anonymous while you're getting your Twitter feet wet.

Don't get too frustrated or disappointed if you don't have a thousand followers in 5 days. Twitter takes time to build your brand, and establish your voice. But when you focus on building quality relationships, then the numbers don't matter.

This past week I was super excited to teach a live, in-person Twitter course to small business owners in New Jersey. The course focused mostly on Twitter basics, with some secret stuff stashed in.

Check out the slides below for “How to Use Twitter to Make an Impact for Your Business” and let me know what you think!

The Wizard of Oz’s Guide to Branding

How to Think Differently