In true Christopher Hitchens-style, I'm name dropping. Hitch was a frequent guest on late night network TV where I once worked. On the nights he visited the DC studio by Capitol Hill, we talked. Or, more like he talked. I listened. In amazement. He had an incisive mind and rampant thoughts. His words quick and poetic. His sentences ebbed and flowed beautifully, like an artist delivering an immaculate piece of work. He was an intellectual powerhouse with defiance (and often rage) permeating from his core. He was unarguably filled to the brim with passion, chutzpah, and brilliance. He also was filled to the brim with scotch and cigarettes. Either in his hand or on his breath, it accompanied the Hitch experience.

In addition to having the honor of meeting him on a professional level, I came to admire his work. From his highly provocative to the raw, witty darkness in his memoir Hitch 22. He commandeered the English language, and channeled one of my favorite writers, George Orwell, with ferocity in “Why Orwell Matters.” While I do not always agree with his opinions, his writing makes me think. Thankfully his words will live on, even though he's gone.

He's a divisive character. But his well-crafted words and convincing arguments are admirable. He's a legend. And he'll be missed. 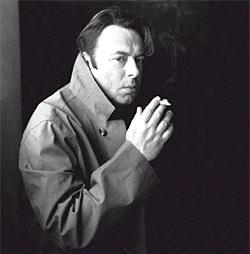