How to Tastefully Use GIF Humor in Content Marketing

GIFs have been the go-to format for many artists on Tumblr for years. Recently many other platforms started accepting the GIF format, including Twitter, Pinterest, Instagram, and Facebook who all allow the GIF auto-play to happen. But if you're one of the many folks who still doesn't understand what these weird letters mean, let's start with the acronym (Tip: it's more fun to say GIF than the actual words – you'll see what I mean). 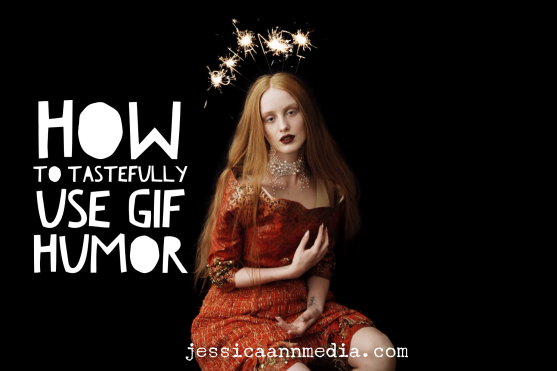 GIF stands for Graphic Interchange Format (yawn) and it's an image format that's used widely on the web. The more exciting way to look at GIFs is like you're giving your viewers a “gift” (minus the “t”). According to The Guardian:

The gif has evolved from a medium for pop-cultural memes into a tool with serious applications including research and journalism.

So, how do you use GIF humor in a tasteful, informative way? Here are some tips:

Even though GIFs are meant to be funny, remember that you're introducing a new activity to the screens of your audience. Cue the serious face: This is a responsibility that should not be taken lightly.

Erich Nagler, the previous art director for The New York Times, believes that GIFs need to serve the story rather than just bring more bells and whistles and visual noise, which the Internet certainly does not need.

Nagler is right. The Internet does not need more noise. If you're going to create a GIF (which is often seen as noise if it's not done right), make sure that the noise serves a higher purpose. While GIFs often don't have literal noise, it's the visual noise (with the movement) that can create clutter in the mind of the viewers. Make sure that your animation serves the larger story that your brand tells. You don't want to have unnecessary movement or noise for the sake of it. You want the movement within the animation to add value to the story.

This brand didn't create a GIF for the sake of being clever. Office Depot created a GIF that tied in perfectly for National Doodle Day. They wanted to show that they're participating in a fun day of doodling while simultaneously (and slyly) promoting one of their products (Tul pens). Notice how there's no mention of the price of the pens. The brand stuck with good ole fashioned marketing simplicity so that the story could be seen and sketched (literally and figuratively).

The best GIFs have an element of surprise. This is usually done through a looping GIF or a seamless animation that at first looks like still photography shot but then unexpectedly starts moving. This tactic is naturally full of humor because it's slightly shocking and a bit mysterious.

The 19th Century German philosopher Arthur Schopenhauer believed that humor is a result of a violated expectation. When GIFs suddenly move, it violates the expectation that the photo was going to stand still. MedicalDaily agrees: A sense of humor is a reaction to unexpectedness. But how do you “do the unexpected” in a way that's not gimmicky?

Example: Frank Underwood's side eye from House of Cards

This tactic works because the leading character of House of Cards is staring at us, the viewers, directly in the eye. His stare into our screen is so unexpected that it violates our expectations of what animation can do.

Cinemagraphs are a combination of both still photography and video, and they do the best job of featuring subtle movement (compared to the more animated GIF cousin). According to Ogilvy, cinemagraphs are deemed more as an art piece and they're all the rage. Its file format is still .gif, but it is conceptually different from actual GIFs. (Here is more information on the difference between GIFs and cinemagraphs).

The subtly of a cinemagraph adds a level of tasteful elegance that's hard to create with GIFs (even though it can still be done).

Artist Ann Street created this eye-catching cinemagraph for Chanel. It works because the animation draws the viewer into the sparkle of the brand story. The nonchalant blink of the model, coupled with the sparkly, firecracker logo conveys the dichotomy between nonchalance and elegance “a vibe that can only be captured through the subtle nuance of a cinemagraph.

Tasteful GIFs are a powerful way to add personality and flair. According to The Next Web, one or two tastefully placed GIFs can add interest and act as a call to action, prompting click-through. The key word in that quote is tastefully because well, let's be real: GIFs often get a bad reputation of being, well, not so classy at times. Instead of using GIFs as a way to share funny Internet memes, think about how they can be used to enrich the experience of your customers.

For example, a company called Invision incorporates GIFs into their website, enriching the user experience.

The design of this website is top-notch, and when it's coupled with an animation, the content truly comes alive.

Remember to treat the GIF medium like a gift to your customers.

When you serve the larger story and are unexpected, subtle, and tasteful, you can elevate the conversations in your industry in a classy, engaging way without causing a ruckus.