The upgrading of humanity requires deep listening and a reset. When we question how far we’ve come with gratitude for the past, present and future, we can concretize our reality through our own experiences, revealing clarity and presence.

I wrote my first poem at age seven: An existential smorgasbord, I could see the many different dishes of my future beautifully spread, communicating my perspective with different flavors. I could feel the span and history of consciousness doing *something* and all I could do at the time was lean into the future and communicate through words.

Words liberated my physicality into an abyss, creating a portal and distributing dormant, evolutionary codes. Words helped me to peel through the layers of multidimensional consciousness. I often felt restricted in my body. And words helped to liberate my identity into another world where time is non-linear.

At seven, I found more meaning in words than I did in the materialist world. It was around this time that I discovered one of my favorite poems, written by Edgar Allen Poe, which only furthered my existentialism:

Take this kiss upon the brow!
And, in parting from you now,
Thus much let me avow:
You are not wrong who deem
That my days have been a dream;
Yet if hope has flown away
In a night, or in a day,
In a vision, or in none,
Is it therefore the less gone?
Is all that we see or seem
But a dream within a dream?

This poem explores the difference between our perceptions of life and the effects of time; it woke me up to the idea that all human sensory experiences are simply a hallucination experienced by humans, a figment of their imaginations and illusions. And this thing called “beliefs” only help to further our hallucinations. We latch onto beliefs and create meaning through them with things like religion, spirituality, culture and communities.

Belief is a funny thing. Belief can lock you into an identity, chaining you into one reality tunnel. Once you shed a belief, you realize the myopic lens you were wearing, like horse blinders, kept you oblivious to other ways of “believing.”

In the same way that thoughts are linear, words are often limiting when only used for their literal meaning. The best poets bridge the gap between the metaphysical and the mind, embodying a new paradigm for existence.

Poets immerse themselves into an unseen reality, using words and silence to create an alchemical change in the world. By introducing the previous structures into dialogue with their own findings, they awaken new realms of consciousness.

There’s always more going on than the literal words.

Modern neuroscience is grappling with this theory and many poets know this as inherent truth.

The frequency that exists in the structure of words is art. And we’re still learning how to master this frequency today.

When we create art from a place that’s beyond the ego and beyond the personality, we give voice to those that don’t follow the leader blindly.

“You are an artist. Your own innocence now is of one who has become an artist, who has been, as it were, transmuted. You don’t behave as the person behaves who has never mastered an art.” — Joseph Campbell

At seven, my quest to make sense of my inner voice, an inner world that I naturally inhabited led me to where I am today, and it continues to fuel my curiosity. Whether through the poetry of Poe or the comedy of Carlin, art infuses our essence with meaning.

When the smorgasbord of life is asking us to taste a new flavor, do we take a bite?

When you couple the knowledge found in these 50 books below with my two words for 2018 (Curiosity and Efficiency) I give myself an A+ in intellectual academia and a B- in the actual embodiment of what I learn. It's challenging for me to get out of my head and into my body, especially when I intellectualize and philosophize about life and business as my default mode.

I do not watch television (I immediately fall asleep) and I rarely drink, so reading is my way to “relax” at the end of a day or the start to my morning. Relaxing for me is intellectual stimulation. And it's fueling the research for my next book.

Here is a list of the fifty books I read in 2018 (Note: All links below are referral links. Please consider purchasing through these links. Thank you!) 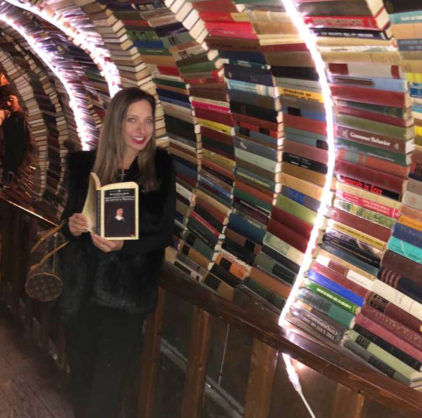 reading Descartes at The Last Bookstore

How to Change Your Mind by Michael Pollan

Want more book recommendations or to know what I'm up to?

Got a great book recommendation? Send me a note and let me know what I should read next:

Note: Audible is offering all listeners of my podcast a free-30 day trial when you sign up through this link.