SXSW is the “SuperBowl” of experiential marketing and this year was one of my favorites. I hosted a book signing at the Barnes and Noble in the Austin Convention Center for my new book, available on Amazon. I also hosted a Mentorship Session where business owners had the chance to sign-up in advance to meet me and ask me questions. I learned a lot, made new friends, and shared some interesting experiences. Here's my recap of the 7 things I learned at SXSW: 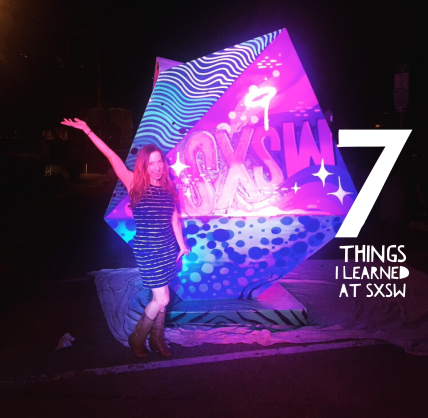 We're a nation of individuals. Searching for connection. Looking to feel we belong.

And the top-tier brands are partnering more with creative artists because of this very Truth. Why? Artists are vessels for authenticity. They live to channel their desires and their emotions. But to be a true “artist” today, you need to be an outsider.

You can't just play cover songs because that's what the people want to hear. You've got to strum your soul on the strings of your guitar. That's the only way to survive.

Sure, it's scary. But when we strip away the hype. And the fame. And the need to “be seen” online, we'll see that our social stream is more than a facade. It's a way to dig deeper and pave a path to live our Truth.

I saw him live at the Spotify house, and he urged the audience to get off our phones and mobilize. He emphasized that in this situation, tweeting and facebook “liking” politicians wouldn't have any impact. Instead, people need to get out of their homes – not just sit on the couch and watch the country vote for Trump. I'm not sure if he pushed for voting, or active protesting, or both. But you could feel the exhilaration in his voice and the energy in the audience. It was a beautiful moment, and it's clearer than ever that only true artists can bridge this gap.

I noticed that tweets during the sessions weren't as common either. I usually love the “watercooler” discussions that happen during the talks – sometimes the tweets and opinions of fellow audience members are better than the real thing. While I tweeted (and retweeted) a few sessions, I didn't notice as much interaction in the Twitterverse as usual.

Have we exceeded information overwhelm? And has technology taken two steps backward because of this? Am I the only one who notices this?

He attended SXSW to talk about his new movie, Demolition. He explains that it's “the story” more than the role that attracts him to the movies he chooses. And he discussed the need to let go of control in the process of becoming who we're meant to be (hell yes I agree). When we see our struggles within our human condition, we can engage in an egoless process to allow our instincts and intuition to guide our path.

He's oh-so-awkwardly charming and just as Donnie Darko-esque as ever (just my type)!

Jake, if you're reading this call me, maybe?

I'm not a fan of hype for the sake of hype. But some companies did a masterful job at injecting their core values into a fun experience for their customers. Hey, I don't see anything wrong with this strategy (especially if it involves flying through downtown Austin on a unicorn!) 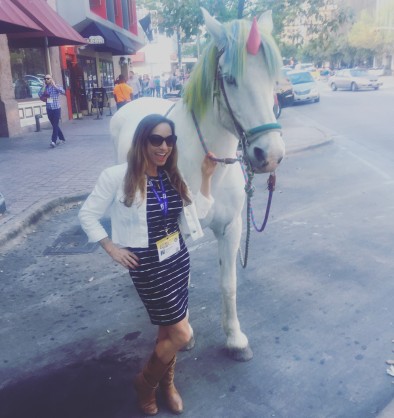 Mr. Robot did the “shiny object” thing literally and figuratively too. Here's the Ferris Wheel that could be seen throughout downtown Austin. 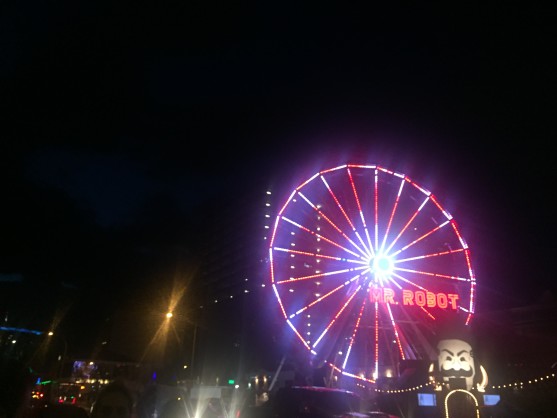 5. Disconnected connection exists. And it's everywhere.

Maybe we can blame the “shiny objects.”

Or maybe we can blame the texts, tweets, posts, or all-around incredible time.

But I felt an ephemeral sense of isolation. The kind of isolation that sits in your heart for a few days as it solidifies into a fleeting “no big deal” that you soon forget it's even there.

Don't get me wrong: friends, love, unicorns, and magic surrounded me – but robots – lots of robots were there too. And it's apparent that the drones and deafening hum of technology will devalue human connection if we allow it. The more connected that we become, the more we need to realize that humans are on the other end of our technology (at least for now).

We're in a weird moment in time. We're experiencing so much screen time that we can no longer truly experience the present moment. We're seeing a shift towards more openness and transparency – coupled with a lack of privacy. From a human point of view, there are many unintended consequences.

My new friend Douglas Rushkoff speaks and writes about this topic. If you want to dig deeper into what we can do about this existential crisis of technology and the economy, he offers some great resources and insights in his new book, Throwing Rocks at the Google Bus. He also spoke on this topic during SXSW – here's his speech.

Ok, maybe everything is weird when you're coming down from the SXSW high. It wasn't the first time I Virtual Reality-d (is that a verb?) I experienced VR with Brian Solis over the summer. But this time it was different.

I was terrible at it.

This could be because:

Whatever the reason, it took me the entire time to understand how it worked. By the time I figured it out, my session was over. I painted “art” (bwahaha) and I'm pretty sure a kindergartener could have done better. Maybe I'll get a shot another time?

7. Truth gets lost in the pursuit of success.

What is this thing called “success” when we're selling our souls along the way? I'm an optimist. An idealist. And a realist. So, here's the answer! Let's join another social network and soldier on: I saved Snapchat just for this moment! (cue sarcasm)

I may have learned these “7 things at SXSW” but I'm still skeptical of where (and why!) we're heading down the path we're on. I have more questions than answers. And even though it's more fun to play the game of “success” I'll always seek the Truth (even if it comes at the cost of “success” – whatever that means today).

If we don't question what's true for us, we'll be left sifting through the sad state of the Internet (without a friend to be seen). And who wants that?

Who made these rules?

I want my (real) reality back…before we all fade to black.

The 19th annual SXSW Interactive festival will take place in less than a week – beginning March 9-13, 2012 in Austin, Texas.The event features the best and the brightest in emerging technology, tons of networking events, and plenty of start up companies to fuel your entrepreneurial desires (one of which will be SocialMesh – a mobile app that's re-engineering the social technology experience to enhance the way we navigate and communicate with the people we are connected to online. Sign up for the beta invite here).Â  SocialMesh will be the app of choice at next year's SXSW. Until then, here's how to navigate SXSW in record time, while having some good, Southern fun in the process:

1. Download the SXSWGo App.Â The app allows you to view/build your schedule, see a map of whatâ€™s happening and how to get there, navigate the tradeshow, stay connected to the social world and more. It also provides in-depth descriptions of each panel, the ability to sort by Film, Interactive, and Music, and even an area to take notes and provide feedback for each session. Fancy, shmancy. Download it now, it's free! Tip: Don't plan too much. Half the fun of Austin is…well, spontaneity! (In conjunction with the SXSWGo App, it's also a good idea to download the Eventbrite app to keep track of all of your RSVP's). 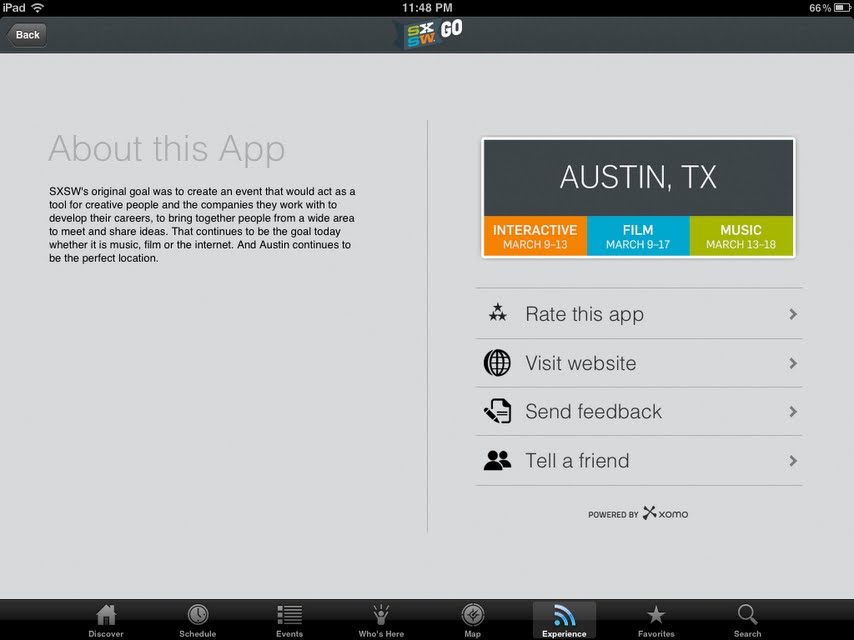 2. Find an Austin local who knows how to get around the city. Traffic will be crazy and parking even more so. (Thank goodness I have the most amazing, clutch girlfriend who lives in Austin and can help me get around).

3. Attend the more casual events. As brilliant as the panels and keynotes may be, the majority of the people you meet will most likely happen away from the sessions, where you can, y'know actually talk.

5. Don't forget your iPad/iPhone/Android/BB charger. Don't pull a rookie move by not having enough battery juice. You'll need your phone to stay connected!

I'll be at #SXSW from Friday March 9 – Tuesday March 13. Will you be there? If so, what are your plans? Leave comments below or tweet me at @itsjessicann. Looking forward to seeing y'all!