Why Earned Media Matters in Marketing

Todayâ€™s digital landscape gives every business the opportunity to and spread its message. For a business to stay competitive, creating awareness through various types of media is key. Here are a few reasons why earned media (combined with owned and paid) is the way to go: 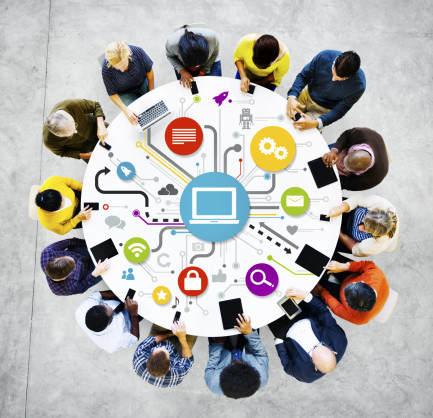 First, what is it?

Advertising generally tries to persuade an audience, whereas persuasion isnâ€™t always necessary with earned media because the information is coming from trusted sources.

Imagine youâ€™re walking down a crowded street with your friend Tom, looking for a place to eat. You walk by a restaurant, and the owner of the restaurant sticks his head out the window and yells, â€œeat here! Itâ€™s the best restaurant on the block!â€

Yet youâ€™ve never seen or heard of the restaurant before, and itâ€™s empty during prime time. Youâ€™ll probably keep walking and look for somewhere more reputable to eat.

Now imagine the same scenario. Only now your friend Tom tells you that itâ€™s the best restaurant on the block. Now, does the restaurant seem more reputable? Knowing the source of the information matters.

Tomâ€™s experience had to be so good that he would want to go there again with a friend. The restaurant earned his trust.

This is a simplified example. But it shows the importance of authentic conversations (both online and in real life) and good customer service when marketing a business. While advertising is great for creating brand awareness, trust and reputation arenâ€™t always possible through this medium. 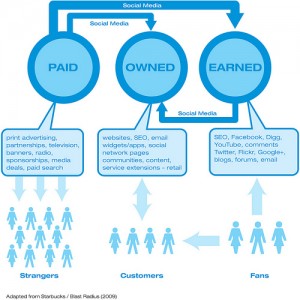 Why focus on Earned Media?

If you sell a great product or service that people genuinely like, getting earned media is easier than ever. The Internet coupled with social media allows for advocates of your brand to willingly distribute your message in an authentic, engaging way. Earned media creates brand awareness (minus the paid ad) and generates publicity.

How to do Earned Media

Earned media is easiest to execute if you already have owned media in place, like a blog or a website. Owned media allows you to retain control of your message, and it allows you to track and monitor your campaign, if and when the â€œviralâ€ aspect of earned media takes off. The information on your blog or website also works to inform and educate the media when pitching.

And the 24-hour news cycle doesnâ€™t mean that you can pitch however you like. Rules and etiquette still exist. It may help to hire a PR consultant or agency to keep up with the fast-pace changes of the media industry (or to use tools like HARO which help you connect with journalists).Â One major change in the media industry is the news release.

Earned media should be part of a coordinated strategy that includes paid and owned.Â Everything needs to come togetherÂ to tell a cohesive story that creates exposure for your business.

For more of my tips and insights, subscribe below.

This article originally appeared on the Vocus blog.

How to Think Differently

Why Shared Media is the Best of Both Worlds

How to be a Happy Genius Hero

How to Create Undeniable Glorious Connections

How Do You Measure Success?

How Humanity Gives Your Marketing an Edge