QR codes are simply a two dimensional bar code that links to information. QR codes (which stand for Quick Response), definitely weren't mainstream 2.5 years ago, when I first wondered how long it would take to catch on in the states. They're certainly a lot more prevalent now. But I don't believe they're always used properly.

Don't get me wrong. QR codes have tremendous potential and add a lot of value when they're used in the right way. But more often than not, the medium gets in the way of the message. Here are a few reasons why your audience isn't picking up what you're putting down:

Access to information needs to be efficient and easy. For the general public, QR codes are anything but. People need to be better educated on how to use them. First of all, an app is required. Apps are easy to find and download for some, but others may not quite understand what makes their smartphone “smart.” Below is a QR code on the cover (just below the fold) in The Asbury Park Press. Notice the instructions: 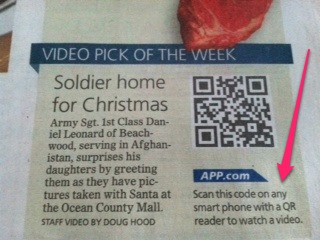 For an audience receiving the paper in print, they might not be the most tech savvy. Is it a stretch to assume that they know how to download and use an app? Most likely. Maybe the paper is testing it out, which I fully support. But I'm not certain if the QR code is the best use of real estate. I've reached out to the Asbury Park Press to find out how many of their readers actually take the time to scan the code. I'll post an update when I hear back. UPDATE: They can't release numbers but they do say that they're “encouraged by the initial response.”

2.The location of QR codes are far from ideal.

I've seen a QR code on a billboard for crying out loud. Are you really trying to reach the people who take pictures on the freeway? I hope not. First of all, it's dangerous. Second of all, good luck trying to capture the code while moving at 65 mph. 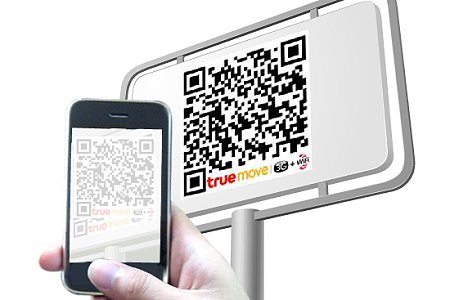 I've also seen QR codes in magazines on airplanes. Many airlines don't have wi-fi, and isn't wi-fi required to access the code? Probably not the best idea. If marketers keep placing them in these ridiculous locations, they'll become nothing more than an over-used gimmick.

QR codes are vehicles for audiences to arrive at information. More often than not, QR codes drive users to a site that's not mobile friendly. Make sure the destination is a happy place. That's the least we can do for users who arrive. After all, don't we want them to stick around for awhile?

What's your experience with QR codes? Do you enjoy using them? Please respond in the comments.

How to Use Media to Market Your Business